It is interesting that on the Feast of Trumpets, there is a sequence to the Trumpet blasts as they are carried out. It is very possible that the MIDNIGHT CRY is somehow tied to this sequence and it is giving us a DATE to watch for.

One must remember that it is the LORD that appointed THE FEAST OF TRUMPETS and this is found in Leviticus Chapter 23 and the 23RD verse begins the Lords discussion concerning it, thus POINTING DIRECTLY TO THE NUMBER 23, AND the 100th Feast of Trumpets since Allenby retook Jerusalem in 1917! The LAST TRUMP WILL FALL ON 9-23-17! 100 in the Bible means God’s ELECTION OF GRACE, so is the Lord telling us that on 9-23-2017 that the Church Age, or AGE OF GRACE IS OVER?

I BELIEVE SO! Is all this coincidental? I know it is not – it is the perfect will of the Lord to warn people of coming judgment. So we have a 9:11 and 9-23 as well. But there is more here…

Notice that when you combine the two calendars of Israel with our own we have both a 9-11 and a 9-23.

Remember that the occult was POSITIVE that 9-23-2015 was the TIME OF THE ARRIVAL. They were so POSITIVE that even the Queen of England and the Pope said we had OUR LAST CHRISTMAS as of 2014. We were told that climate chaos, of a type never seen before will come on 9-23-2015. What happened? The Lord delayed everything for TWO YEARS, as the FEAST OF TRUMPETS WAS DELAYED FOR TWO DAYS IN ISRAEL BY A DIVINE SAND STORM so they could not see the NEW MOON for two days. Few are paying any attention to this.

The Lord has been warning for YEARS for people to COME INTO ALIGNMENT with Him. There are 9 letters in ALIGNMENT. It means “COME, LET US REASON TOGETHER…” All of this is ignored. Now it is much shorter. Days even…

This eclipse was an evil omen for America and also ISRAEL, for an eclipse is a removal of LIGHT, and a SUNSET is a removal of light. Get ready, for something evil is coming down the pike. As Bob Dylan said “The times they are a changing,” and also “A slow train is coming around the bend.”

The number 99 is showing up everywhere, as in 9-23 and 9:11. But there is a deeper mystery here, for the Trumpet blasts go like this: ONE LONG BLAST, then 3 SHORT BLASTS and then 9 VERY SHORT BLASTS.

The last blast of the sequence of 99 blasts is known as the LAST TRUMP. As stated, it is the 100th and very long single blast, and that concludes FEAST OF TRUMPETS, and the pivot to Israel.  All this points directly at 9-23-2017 and the STAR SIGN, and the conclusion of the AGE OF GRACE because 100 MEANS ELECTION OF GRACE, meaning that from Pentecost to the LAST TRUMP on 9-23-2017 will conclude the Church Age.

The next thing to notice is that these trumpet blasts require WIND. Wind is SPIRIT. Jesus told us that “These things I say unto you, they are SPIRIT and the flesh PROFITS NOTHING.” All of this IS SPIRIT, because the CHURCH IS A SPIRITUAL CHURCH, NOT A PHYSICAL CHURCH. Do you see? The AGE OF GRACE IS A SPIRITUAL GRACE, a chance to ENTER IN, TO GO DIRECTLY INTO THE HOLY PLACE AND MEET THE CREATOR, A SPIRIT OF LOVE. The way in is via the STRAIT GATE and NARROW WAY. It is all coming together, and MILLIONS are going to be sent away with a terse “I NEVER came to KNOW YOU.”

The gainsayers are all coming out of the woodwork now saying this star sign concept is total insanity on the part of a few people who basically could not know anything, they are neophytes in the faith, young babes and we, the BIG GUNS in the PROPHECY CIRCUITS, know all of this is total nonsense.

Here is my reply to the gainsayers out there – you are puffed up, full of yourselves, very deceived and deceiving others, unable to fathom that your “ministry kingdoms” are about to be destroyed. You have taken the seats of honor, and you have never gone to the LOWEST ROOM and waited for the Lord to come to you, to sup with you. You have bypassed JUDGMENT and LOVE, and you know not what is said here. REPENT or PERISH. Your salvation gospel is false, it leads to ruin. REPENT, search out the Lord and FIND HIM, KISS THE SON, LEST YOU PERISH IN THE WAY.

The Lord has built this entire UNIVERSE by mathematics, by the numbers so to speak. To ignore the MASSIVE AMOUNT OF EVIDENCE IN THE NUMBERS NOW CONVERGING ALONE, IS TO BE IN TOTAL DENIAL. WAKE UP!!!

By the way, NASA released WHITE BALLOONS (not confirmed or vetted, but it did say “nearly 100 balloons”, meaning 99, releasing deadly material (IT IS CLAIMED), into the atmosphere along the eclipse path, to begin the CULLING OF AMERICA. No one knows, but there is a very strange song called “99  RED BALLOONS”, that deals with WAR, DEATH and DESTRUCTION, just as DEAGEL.COM portrayed in their huge depopulation of America: 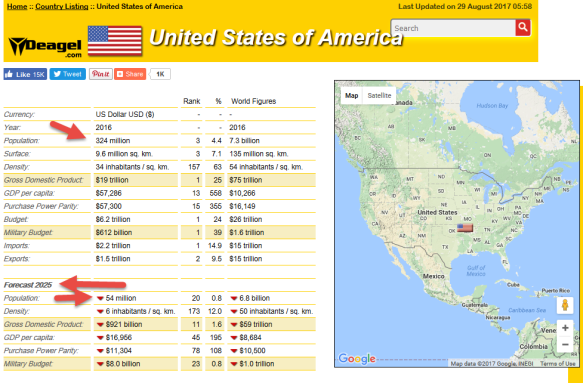 Notice that the population in the Unites States drops from 324 million down to 54 million by 2025. That is a drop of 27o million over 8 YEARS. Remember the solar eclipses over America that form an X is over a 7 YEAR PERIOD. This confirms the GREAT CULLING AND THE NASA BALLOONS may be connected, maybe not…

You and I in a little toy shop
Buy a bag of balloons with the money we’ve got
Set them free at the break of dawn
‘Til one by one they were gone
Back at base bugs in the software
Flash the message “something’s out there!”
Floating in the summer sky
Ninety-nine red balloons go by

Ninety-nine decision street
Ninety-nine ministers meet
To worry, worry, super scurry
Call the troops out in a hurry
This is what we’ve waited for
This is it, boys, this is war
The president is on the line
As ninety-nine red balloons go by

As ninety-nine red balloons go by

Ninety-nine dreams I have had
In every one a red balloon
It’s all over and I’m standing pretty
In this dust that was a city
If I could find a souvenir
Just to prove the world was here
And here is a red balloon
I think of you, and let it go

This appears to be an ARRIVAL of something and WAR. Notice the cities are dust now. SUDDEN DESTRUCTION.

Another hint at the removal of the Church is that the SUDDEN DESTRUCTION is for THEY and THEM, and not “ye brethren” for we are the CHILDREN OF THE DAY and not of the night. I believe the rapture brings SUDDEN DESTRUCTION.

THE 8-21-2017 ECLIPSE WAS A WARNING FOR THE RISE OF THE NEW WORLD ORDER AND THE GREAT “CLEANSING” OF AMERICA. KEEP WATCH. America has 40 days to repent, but we know she will not repent because Jeremiah says so.

Now we are hearing that many of the victims of Harvey are being either killed/murdered at some of the shelters in the Harvey flood areas. Unable to vet, but it was on the news, before being “cut off”. The great culling of Americans and around the world, per the Georgia Guide Stones and Deagel.com has begun and will now accelerate.

The North Korean thing is a TRAP for mighty Babylon. “Surely the LEAST OF THEM shall draw BABYLON OUT.” You are watching it RIGHT NOW.

Therefore hear ye the counsel of the Lord, that he hath taken against Babylon; and his purposes, that he hath purposed against the land of the Chaldeans: Surely the least of the flock shall draw them out: surely he shall make their habitation desolate with them.

Is Kimmy the Wiz Kid the LEAST OF THEM? Remember that the Lord often uses the seemingly foolish and uses them to confound the seemly “wise.” North Korea is in fact “drawing Babylon-America out.”

8 thoughts on “TRUMPETS & THE WIND”