It is very interesting in view of the Bible time codes that now NASA seems to be telling us that the so-called peak in 2012 is not the end of it all – and that Cycle 24 may have a DOUBLE PEAK, with the last peak somewhere in 2013-2014-2015 or so, and as NASA says, “no one knows what the Sun is going to do next”. God knows exactly what the Sun is going to do, and may well have warned us about Cycle 24 thousands of years ago – not only of a total surprise in the Sun, but also the healing of the breach between Himself and Israel.

Now the thing to watch closely here is the last peak and then the downward slide to the minimum. Remember the last X-45+ flare of Cycle 23 came during the downward side of the cycle. The Sun has been anything but regular, and as we pointed out in our February Issue of the Prophetic Insider – beware Cycle 24. 24 is also an interesting number for the Lord, as in complete. 24 Elders, etc. 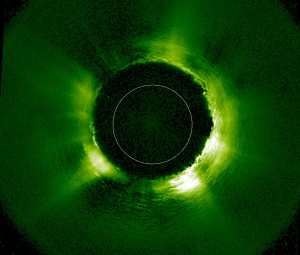 It seems that Sun appears to be expanding as well. Some think it will begin to change fuels. Remember the Catholic prophecy of 3 days of darkness? Could the Sun actually BLINK OFF fora short period? That would startle the world!!

We know that Isaiah tells us that the Sun will go into a mini-nova stage and becomes 7 times brighter than it is today, and that the moon gives off the light of the Sun. It implies this occurs towards the end of the Great Tribulation, which places it most likely at 2016-2019 area of time if we are reading the time lines correctly. Israel is the time-clock of the Lord. Watch Israel and you will know how close we are to things. That is why it is important that we watch closely the events between March 20th and early April. Obama’s trip to Israel may well be the key that tells us exactly what is going to come or if it is delayed, then we know the Lord has delayed things once again. So we must watch closely, and if Obama does go, and if he does confirm the Oslo agreements, and if he does demand Israel go back to the 1967 borders, and if they do that in exchange for Obama to take down Iran’s nuclear programs, then LOOK OUT, FOR WE WILL BE ENTERING IN.

It is of interest that from the time Obama received the Nobel Peace Prize to March 22, 2013 is 1260 days. More than just a passing interest here, and there is much more going into this. So we wait, and we watch. By the way Doofuss has some comments here about this: